How its Been Done in the Past

Across the board, large construction projects take an average of 20 percent longer to finish than scheduled, and are up to 80 percent over budget. That’s according to a recent McKinsey report on the future of construction technology.

Most of the issues that come up during construction that lead to overbudget, past-due projects become obvious late in the construction process. But if done correctly, most of them can be prevented during preconstruction. Having an integrated preconstruction strategy that focuses on both driving accurate estimates and schedules as well as properly demonstrating visuals of the project scope and sequence will ensure teams win more work and promotes successful execution during construction.

During the preconstruction phase teams are constantly being challenged to find better ways to communicate with the Owners and encounter a lot of other uphill battles.  It’s one thing to deal with design changes and updating quantifications when teams are operating under more traditional Design-Bid-Build delivery methods. But what happens when teams are doing Design-Build projects? Doesn’t that just make these challenges even more apparent?

Managing and interpreting design intent and then accounting for all changes in the budget is difficult. Especially when it comes to Design-Build projects where changes to the design is happening simultaneously. Construction teams are hard pressed to keep up with the fast pace of work and coordinate between stakeholders.

The greatest challenge in preconstruction is accurately hitting multiple moving targets. Design iteration is a necessary part of the design development process, it can’t be eliminated but it can be controlled and accelerated.

Read the [eBook] Winning in Preconstruction 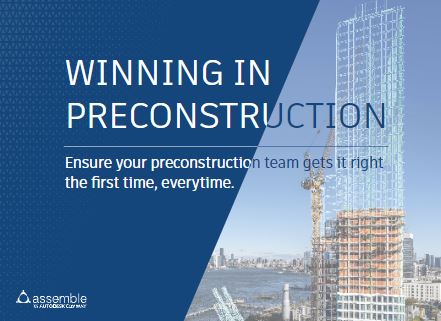